The evolution of the Kyotex system

Materials and componentsReinforcements and glues  November 6, 2018

A wide and dedicated range of solutions proposed by ALC, and its gluing system, both for the footwear and leather goods sector. 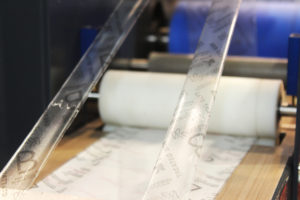 In the last year ALC, holder of the Kyotex system, has developed the industrialisation of all its production processes. The making of most of the adhesives, which previously took place outside, is now carried out entirely within the company.

Luca Vicentini, CEO of the company, explains the reason and the advantages of this step:
We have always focused on the concept of the system: we sell complete gluing systems consisting of adhesives and dedicated machinery not only for the world of footwear, but also for leather goods. For the system to function at its best and at its perfection, it is important that we have complete control over the production, even of adhesives. Taking it home allows us, furthermore, to increase production capacity and managing it better.

An important year, therefore, this 2018?
“Yes, if we consider that we have also created a real research and training centre in Mogliano Veneto, able to provide assistance to our staff, but also to our customers, especially those who work on the Riviera del Brenta”. 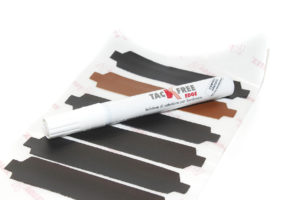 You have presented a curious novelty during Lineapelle…
“A pen… We have many customers, especially in Asia, who produce large quantities of wallets. Their problem is no longer that of gluing, which has been largely solved, but the production in an absolutely clean way, especially on the edges, avoiding glue residues. An issue that particularly afflicts the department assigned to the gluing of pockets for credit cards, which faces the application of small folded straps. Our automatic gluing system solves the problem thanks to a flash unit that, positioned at the entrance of the machines, loosens the adhesive before passing under the rollers. This adhesive then retracts inside the edge during the cooling phase.
If the result is not more than perfect, since we are talking about 8 million straps per week just for one of our customers, our pen (called Tack Free Edge) comes in, which is loaded with a liquid inhibitor able to exactly inhibit, residues of glue. A handy and useful tool to improve the product and facilitate/speed up the quality control operations”. 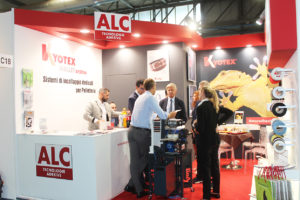 Is there any surprise in store for the future?
“There is a great innovation of Product and Process, on which we have been working for several years, and which will allow cold structural applications in many application fields. A very ambitious goal: a two-component transfer adhesive tape applicable with the same ease, speed and cleanliness that distinguishes the Kyotex System.
It is the natural evolution of a Bonding System that we have successfully brought all over the world and that thanks to the continuous research has always grown in terms of performances and extreme production efficiency. Also in this case the innovation is not limited to the structural adhesive. ALC proposes, in fact, the application methodology with new machinery and dedicated systems in footwear and leather goods. Always respecting the environment: Naturadhesive”.

Via Einaudi 6, 10070, Robassomero Italy
More info about this company →