New ways of distribution to be a “Global Artisan”

Internationalisation, sustainability and online marketing, these are the key words on which the footwear centre needs to focalise to gain market shares.

«Our artisans must become global and they must better grasp how to distribute their goods», states Annarita Pilotti, Chairwoman of Assocalzaturifici, in the opening speech at the “L’artigiano globale” (The Global Artisan) conference, held on the 11th of November at Palazzo Venezia.

The performance of the Italian footwear companies remains positive, but the day-to-day problems they have to face to maintain a leadership position on the world market are many. For this reason, every year, Assocalzaturifici inspires the segment, providing ideas to reflect upon and strategic advice, organizing a conference that is becoming increasingly attended by entrepreneurs in the sector. 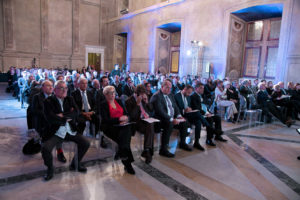 After “L’artigiano digitale” (The Digital Artisan) theme of the 2015 event, which covered different communication methods and online sales, this year the attention is focused on all the tools that enable artisanal footwear manufacturers to distribute their goods on the Italian and international markets, along with different approaches, tools and strategies to support their business.

Alessandro Decio, CEO and general manager of SACE – a company that offers a broad range of financial insurance products and services to support the competitivity of Italian companies and has also purchased SIMEST, which helps Italian companies through the internationalization process – reminded us of the global growth slowdown, particularly underlining the weak performance of commercial exchanges, which are now around 2-3% (against the 12% of a few years ago). And the uncertain scenario (see also Brexit and Trump) which, according to Decio, will force Italian footwear producers to become increasingly more aggressive in gaining a share of some of the most important markets, turning their attention to exports, as well as using innovative financial instruments.

Fulvio D’Alvia, CEO of Retimpresa, is also of the same opinion: «Economic competition is becoming increasingly more complex and the industrial models inspired by traditional logic no longer work if you want to be successful on the market. You need to grasp the opportunities of an economic scenario that’s in constant evolution, which is the reason why internationalisation has become such a key word. An overseas presence is fundamental, but difficult, especially for our enterprises, which are nearly always small or relatively unstructured.

The Network Contract meets the needs of these companies, allowing them to work together on a shared developmental programme, using a simple and flexible tool. In Italy, today, there are 16 thousand active Network Contracts, but there are only 23 in the footwear sector. We can do a lot more, especially when you consider that these types of contracts can also be signed by companies operating in different sectors that have a common goal. For example, with the objective of forming collaborations that harmonise distribution policies». (for further information visit: http://bit.ly/retimp)

And again, on the subject of internationalisation, Antonino Laspina, Marketing Coordinator of ITA-ICE, underlined the constant commitment of the institution to promote the growth of footwear exports, something that they will continue to do in 2017, with the Roadshow – the aim of which is to flank companies in the internationalisation process and assist those realities that intend to open themselves to the overseas market, in search of new business opportunities – and incoming international buyers during theMICAM.

Another fundamental driver for incentivising growth was singled out in the theme of Sustainability. For Federico Brugnoli, CEO of Spin 360, this is an extremely hot topic which is gaining increasing interest. The call is to carry out concrete actions that enable footwear producers, and the production chain in general, to gradually transform into highly sustainable enterprises without ‘cheating’, because, today, claiming you’re sustainable when you’re not is very risky for your image, but also for the company’s wallet. The path that companies take towards sustainability is equally important when you consider the guidelines of the European Community. In fact, it is highly likely that in a not too distant future the EU will be imposing restrictive laws on the entrance of goods into Europe.

But how is the theme of sustainability perceived by the footwear world? «According to a survey commissioned by Assocalzaturifici – explains Brugnoli – it has emerged that client companies are increasingly embracing the concept of a ‘sustainable business strategy’, particularly in the high-end segment of the market. On the other hand, the manufacturing companies (the footwear factories) still do not seem to have responded to the changes in the market, also due to the absence of an overall strategy on this theme. The biggest divide between clients and producers exists for those themes for which specialist services have yet to be developed by the mapped technological centres». (to find out more visit: http://bit.ly/stusos). 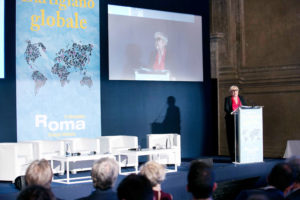 Finally, there’s Online. Many voices mentioned virtual commerce as a key weapon for winning over the market of the future. Starting with Valentina Visconti, Country Manager Italy of vente-privee and Privalia, who presented the services of the online fashion and lifestyle outlet, which runs sales events of some of the top brands at unbeatable prices: «Online media is an incredible showcase for every brand. In our case, for example, there’s the opportunity to engage with 50 million potential clients and carry out promotional activities in 14 countries, as well as sell off remnant stock from the previous season».

For Alberto Baldan, A.D. of La Rinascente, Internet is an obligatory and inescapable choice: «In the first 5 minutes of the Chinese Singles’ Day, we generated a transaction volume worth one billion dollars, which rose to 4 billion in the space of 30 minutes. I’m convinced that Italian manufacturing structures are very strong; what’s missing, however, is the ability to promote the sector, particularly on the web».

Therefore, to close with the words of Giulio Di Sabato, Chairman of Assomoda: «The challenge is to join forces and structure ourselves to sell the great added value of ‘Made in Italy’ products better than ever before».