Italian footwear, a slow start to 2018

After having ended 2017 with moderately positive indicators, pointing towards a much hoped for trend reversal, the National Footwear Assembly faces the disappointing abrupt halt of 2018’s first quarter, with an eye to generational turnover in companies.

Sector data presented during the Assocalzaturifici National Assembly outlines a less than satisfying scenario for Italian footwear at the beginning of 2018: “2018 began with a slowdown in foreign sales and production rhythms. – explains President Annarita Pilotti – Exports recorded a weak rise of +0.1% in value, but fell by more than -3% in volume, when compared to the same period last year. Additionally, the difficulties being experienced in some international end markets are cause for worry. In particular, in the CIS area, the recovery that began in 2017 has come to an abrupt halt, with a -7% drop in value and -2% fall in quantity recorded during the first three months of 2018. Russia, instead, has experienced an overall -10% decrease. There is also a slowdown in the Far East (-6.3% in value), where the further growth of China and South Korea has not been enough to compensate for losses in Japan and Hong Kong”.

With a 2017 characterised by a recovery in production rhythms and a production volume superior to 190 million pairs, export values recorded their best performance of the last 15 years at 9.2 billion euros (+3.2% for a total of 211.1 million pairs, up +2.5%), while the foreign trade balance of 4.54 billion euros was up +8.5% from 2016. Thus, there were high hopes that 2018 would be a turning point for many segments. Instead, so far, it has been a great disappointment. 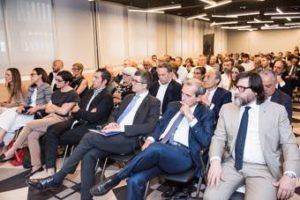 Sector exports during the first quarter recorded a modest performance, while the figures regarding leather footwear in particular were alarming, with a -2.8% drop in value and -5.5% decrease in volume.

Among the markets, the EU remains the main end market for 7 out of 10 pairs exported, with values holding steady at +0.3%, while volumes experienced a downtrend of -6%. Moreover, a drop of more than 10 percent in export volumes has characterised the negative performance of key markets like France, Spain, Belgium, and the Netherlands. Instead, the performance of non-EU markets has been much better: holding steady in value, with volumes on the rise by +3.9%, there seems to be a continuation of the dynamics first experienced in 2017. Thus, Switzerland reinforces its role as a logistics hub also for footwear, recording a +10% increase in volumes and value. In North America, the USA continues with its recovery in volumes, while dropping-off in value (+10% and -10.2% respectively), while Canada takes flight with double-digit figures (+23%), which might also be partially due to the provisional entry into force of CETA. The CIS area, instead, has interrupted what seemed to be a promising recovery, with the Russian market in great difficulty. Finally, the Far East confirms a negative performance. 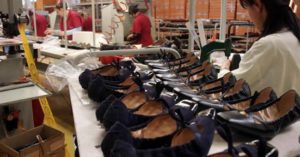 Imports, instead, are once again on the rise, recording an overall +5% increase and an incredible 10% increase in Chinese imports, which is not enough, however, to overcome the Italian trade balance, which remains very favourable at 1.069 billion euros, notwithstanding the -6% downtrend from the same period in 2016.

What is the outlook like for the rest of the year? Member footwear manufacturers interviewed before the National Assembly all agree that the USA market has the best potential for growth in the months to come. They also point out strategies like research on new markets, cost optimisation, and product innovation as key to overcoming the current economic trend.

However, there are still two critical problems casting a shadow over the sector: from one end is domestic consumption, which continues to remain stagnant also at the beginning of 2018. From the other end, there are business crises and workforce crises, which have only gotten worse during the first quarter of 2018.

As far as the future of footwear manufacturers is concerned, Assocalzaturifici decided to take a closer look at the delicate phase of generational t

urnover by having the LIUC Business School undertake a dedicated study, with the results presented at the Assembly:

The study, Family-run businesses? A genuine enterprise!– declares Annarita Pilotti – demonstrates how for sector companies true continuity is represented by the change that youths raised in entrepreneurial families can impart to these businesses, if given the freedom to express themselves and innovate with regards to the company’s organisational structure.

In a context where around 70% of family-owned businesses do not survive beyond the first generation and less than 10% arrive at only fifty years of activity, it’s important to avoid traps like familism, immobilism, and excessive closed-mindedness to outside influence. Instead, the focus should be on “instilling a sense of responsibility among members of the family, undertaking the right educational pathway, engaging the support of non-familial third-parties, and a continuous analysis of leadership models” as key factors to the company’s success.