Schmid’s ‘Toile’ fabric, made by a student of the textile Culture course held by prof. Livia Crispolti of the Brera Academy, was selected by the American designer Angela Scott for one of her shoes

Roberta Ercolano is very satisfied and grateful for the opportunity offered by Schmid: «The history of this company has won me over: the desire of doing, creating, researching, going beyond and grasping details has fascinated me. Schmid has allowed us students to work with its fabrics and thus build our future».

But who is Roberta Ercolano? One of the female students who attended the teaching of Textile Culture at the Brera Academy. Teaching has also been supported by Schmid, the company which, thanks to the collaboration with Milan’s precious educational institution, continues its mission speaking up for the excellence of Italian craftsmanship in the world through young people’s creations, who are supported every since the beginning of training courses and facilitated in their first contact with the market.

And when Angela Scott, during Lineapelle, chooses one of the students works presented at the Schmid stand, the meeting actually takes place and the project promoted by the Milan company, a supplier of fabrics for national and international fashion houses, achieves its purpose.

Our kids need to get in touch as soon as possible with the production reality through which they will face each other one day – emphasises Paolo Ciccarelli, Schmid’s Chairman and CEO – Giving schools the opportunity to collaborate with companies means getting them to open a window on the world, getting them out of the theory of the academy and allowing them to live real life.

The ‘Toile’ fabric, made by Roberta Ercolano, has thus become part of the collection of The Office of Angela Scott, a creative laboratory that crosses the boundaries of traditional craftsmanship by introducing unconventional materials. It completed the idea of a “deconstructed” version of a typical double monk strap.

“I was struck by the artisan nature not only of the fabric itself, but also of the incredible workmanship. When I later found out that the article was designed by a student, I fell in love with it even more, because there is nothing more beautiful than supporting young people in the creative industry” – said Angela Scott.

SCHMID AND THE BRERA ACCADEMY OF FINE ARTS (MILAN)

With Professor Livia Crispolti, textile designer and teacher of ‘Textile culture’ at the Brera Academy of Fine Arts in Milan since 2005, we retrace the beginning of the collaboration with Schmid: «I have been working for fifteen years with various textile companies in Lombardy, companies that believe in the importance of relating with young designers making them expand their curricular training and allowing them not to be stuck in a theoretical and conceptual dimension, but to be able to survey the market’s issues».

What does the cooperation consist of?
«The company, in this case Schmid (with which we renewed the agreement for another 3 years), provides students with the textile material necessary to develop their thematic projects. Even though the most interesting aspect of the collaboration, and also the most appreciated by students, is the possibility of building with the company itself a concrete working path that runs along the entire supply chain process, refining the idea through a commercial filter, which finally leads to the development of a prototype that is exhibited at the Schmid’s stand of Lineapelle in February. A unique, rare, almost unrepeatable occasion». 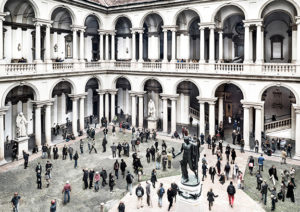 What are the most interesting results achieved through this experience?
«Undoubtedly the expansion of the perspectives of young designers who, during the textile culture course, in addition to studying textile products and proceeding with the workshop activities on the looms, see their study materialise in a real prototype, which sometimes is even chosen to enter the collections of companies or appreciated by fashion brands. A concrete opportunity to get in touch with the labour market. And let’s not forget the advantage that companies can develop thanks to a fresh source of energy, creativity and imagination».

Via Lombardia 32 /A, 20098, San Giuliano Milanese Italy
More info about this company →