Where worldwide footwear is headed

2017, a year without especially significant results for worldwide footwear, but with a few small surprises and a constant rebalancing between East and West. This is what emerges from the “World Footwear Yearbook 2018” report promoted by Portuguese Shoes.

While worldwide footwear production in 2017 experiences a slowdown in growth, recording 23.5 billion pairs produced for a result that is +2% over 2016, China is ranked as the top producer, followed by India, which is up +10% over the previous year, and then Vietnam and Indonesia. Among the top 10 producers, Turkey registers an important performance, with its production more than doubled in recent years, alongside Italy, which pushes Thailand out of 10th place. Brazil instead falls back to fifth place, paying the price for its weak domestic demand. 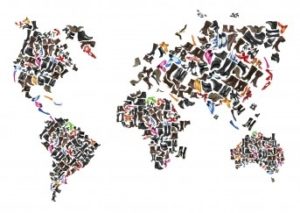 2017 also sees exports move from Asia to Europe: despite five years of decline, China sees its share grow by 67.5%, while Vietnam and Indonesia experience a downtrend, and Hong Kong drops out of the top 10 exporters. In contrast, many European countries significantly increased their exports, even though Italy is the only important producer in Europe, thus reconfirming the tendency in Europe to adopt a business model of re-exporting.

As far as imports are concerned, although 8 of the top importers are European, the USA remains the leader in the classification. The only Asian presence in the top ten is Japan: nevertheless, in terms of continental fluxes, the importance of Asia and Africa continues to grow to the detriment of Europe and North America.

In terms of consumption, there is a general realignment of worldwide demographic dynamics. A strong signal of this trend is represented by India, which steals second place from the USA as the second leading consumer right after China.

The last and most surprising fact to emerge from the World Footwear Yearbook 2018 instead regards the kinds of footwear exported: with a +320% rise in exports, a share that has more than doubled, and a +92% increase in average export price between 2007-2017, footwear with a fabric upper is the true outsider in global competition. Driven by the global success of the knit sneaker, fabric shoes confirm their unstoppable growth in 2017, recording a global export share of 30% both in value and volume. A phenomenon that is not to be underestimated.